THIS IS THE MOST AWESOME OF ALL AWESOME THINGS.  Sent to me by my cousins in Portland (who are partially responsible for this): Ohio is a Piano.  Here’s the backend and explanation.

It is pouring in Columbus and I am worried about my grandmother. This made me smile in spite of that: 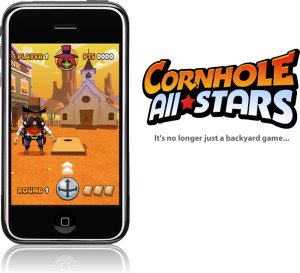 …We are based in the great city of Columbus, Ohio. That’s right I said it: Columbus, Ohio. Our fine state lays claim to the origins of Cornhole. Don’t even give an ear to Kentucky who thinks they invented the game. It all started here. One only has to drive through the OSU campus to see lawn after lawn filled with Cornhole players. You get a feel for its popularity and tend to wax reminiscently on the game’s origins. The religious experience of Cornhole is spreading like wildfire. It seems to have found its way to the suits of downtown Brooklyn, who are rumored to participate in “Corporate Cornholing” and to Scottsdale, AZ, where they host the Worldfest of Cornhole.

That said, we did not set out to recreate a game for the iPhone because of popularity, rather, Chuck and I just wanted to create a fun, social game that showed some Ohio pride with a twist. So, we put our heads down and teamed up with expert designers and developers (Corn fed- Columbus grown I will add). And with local pride blowin’ under our wings (don’t forget Ohio gave birth to flight), we began to conjure up visions of corrupt sheriffs, scurvy-infested pirates and rickety crypt keepers who would dominate western towns, pirate ships and graveyards…

Much more, including development notes and concept art, at Graphic Conversation.